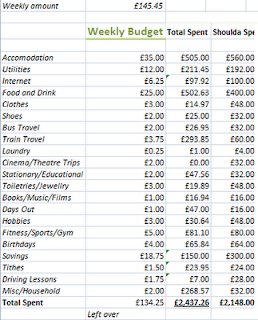 Since I thought I had about a £500 deficit from last term, I did as the government tends to do and made cuts - which in my case did not consist of closing down libraries and doing strange things to the NHS but meant not spending in some areas where I had over spent last term.

My budget isn't what I would like to keep my spending level at - it's literally all the money I have for that period, so if I go over, it comes out of my overdraft and will need to be paid back eventually. I think it's much better to do that now than at some later, non interest free date >.<

This term was hectic crazy money wise. Firstly, the biggest expenditure in my Miscellanous/Household category was due to the fact that my house mates moved out and took their stuff, which meant I had to buy furniture (since I've never lived in an unfurnished house before).

It is now on my list of things I am not fond of doing. Maybe I will be a minimalist when I grow up. Having this unexpected expense means I thought I had to do that annoying thing of borrowing from myself in the future and take it from my savings from next term. I sulked.
And then I had to get over it and just took it from my savings for this term.

My last pair of cheap shoes that I'd bought just after the beginning of the new year were actually getting really embarrassing to me, my family and everyone associated with me, so I tried to invest in a pair that would hopefully last me.

Timberland Women's 96358 boots from Amazon.
But they were too small (boo to deceptive American sizing on British sites!), so they got returned and I still have shoe money (yay!)

(They were beautiful though - I have great taste).


I've been slacking massively on the saving up for my driving lessons. My agreement to myself was any money not spend on using the bus to get home would go to driving lessons...but it was so cold at the beginning of the year I couldn't take it and sprung for the bus on several occasions, especially after I lost my gloves *sad face*. You can call me wimpy, but when you're literally incapable of speech because you're so cold, then £1.20 is a small price to pay.

I overspent on train travel because I haven't claimed my transport costs yet (I know, I know) and I had an impromptu trip to London. If I had known for definite that I was going at an earlier date, I could have gotten an advance ticket but it was all very last second/night before, so full whack I did pay.

Because it's been a bit like Musical housemates these past few months, I've been too lazy/fed up trying to work out who owes me what.
Frankly my dears, I couldn't give a dog's ear at the moment and have resigned myself to the fact I'll just absorb the costs.
I also paid for tickets for an event in a couple of months, hence why my Days Out category looks a little bit whacked.

Aaand, I overspent on food. But what else is new?
Tweet