I made a dress: To Infinity and Beyond!

This dress and I have a long history, so you may want to pull up a chair.
If you're a seamstress or a sewist, you may want to stop now, because some of these pictures may be akin to watching a car crash/horror movie.

I first saw this dress in a hair forum - someone had posted up a thread saying 'I made a dress!' and, intrigued, I clicked my way in. I was stunned. She had done it in a stunning shade of bright yellow and hand sewn it. The others declared her crazy and I had to say, I completely agreed with them, though my skepticism was allayed when she pointed out that there was only one seam.


Plus, it was convertible, so you could switch it up and change it to a halter neck, to a dress with sleeves, or with one shoulder and twist and stretch to your heart's content. It's commonly known as the convertible and/or infinity dress.


Only one seam? 1000 styling options? Truly, this dress was made for me, the very epitome of the term 'absolute beginner' and had no clue about how to make clothes, but was quite fond of wearing them for their heat trapping properties? And if I got this right, I'd never need to shop for clothes again, an activity I find truly ghastly and horrendous.
Hence my limited wardrobe and utter disinterest in fashion.
The one thing that got me fired up about this dress was that it's simplicity meant that mistakes would be easily forgiven and swallowed up by the effect of the dress.

This was about....4 years ago? Yeah, I know. But when I get stuck on something, I generally tend to get obsessed with it until I actually do it.
The impeding arrival of the Wonder Thing's sister's wedding gave me a brilliant reason/excuse to try and make the dress.


2 weekends to make an entire dress, when I've never even cut out a scrap of cloth before?
It's been the reason I've been so distracted from here, because my usual blogging time was taken up plotting on how to effectively make this dress.

I used four tutorials:
a) This is the original one from 4 years ago
b) This one was the main one I followed and it references a) and c) quite a bit.
c). This was my supplementary one for when things got a bit difficult, but her directions are slightly different, which caused even more difficulty when sewing on the blimming waistband.
d) This is the youtube video I used for when the waistband was too tough.

The original directions call for a stretchy material, which wasn't too hard to find. What was difficult was finding  one in a colour that didn't make me want to throw up I liked. I don't wear prints or bold patterns very often because I don't think they suit me, and I definitely didn't want the sheer options so I wanted a plain material. But since I was planning on doing some serious dancing in this dress, I needed something my skin could breathe in. So I chose a cotton lycra blend off a seller off ebay. That basically gave me an option of two colours, and there wasn't enough of the purple I wanted, so I went with the blue.
Ah! I love choosing things by process of elimination!
Despite the macabre state of my finances, I sprung for 7 metres of fabric, on the basis it's better to be swathed than sorry. One thing I would definitely advise before buying any fabric at all is working out how much fabric you'll need, especially if like me you're not buying when it's on a discount.
You'll save money, time and storage space.

See here for a visual depiction and a mish mash of measurements:

And nope that area to the right isn't just artistic license. That's how much fabric I had left over.

I don't have enough space in my room to house 4 metres of fabric appropriately!

The first thing I had to do before actually cutting out any material was to cut out the pattern for my circle skirt. 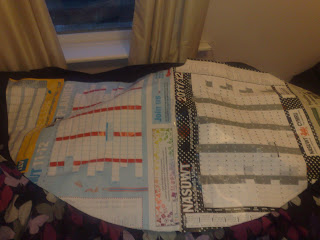 I stuck together two free yearly calenders I got, but to make up the extra bit, I went for a bit of newspaper.
This was a mistake. Newspaper is RUBBISH at being pattern paper - when I tried to pin it to the material, it kept tearing, which made my cutting even more haphazard, and that was one area I actually really didn't need any help in!

I also didn't pre-shrink my fabric before I stitched it and I forgot to cut the selvedge off the fabric before I measured and cut it, so one side was slightly shorter than it should've been. Whoops, my bad! Washing the dress should be an interesting experience.

I spent about half an hour practising machine sewing [for the first time ever in my life] on a scrap piece of fabric... 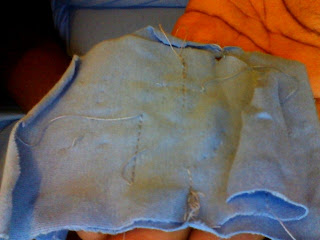 And after seeing that terrible, terrible example of sewing, I decided, ah, what the heck! Let's just go for it.

I pinned both sides of the skirt together, and then sewed up each seam. If you're on the petite side, you may be able to cut your skirt out of one piece. Since I am not, I could not and had to do two semi circles and then sew them together.

After I completed my first ever circle skirt, I proceeded to regal the Wonder Thing over the phone about my creative sewing genius, in detail, whilst swishing about the house wearing it. I don't think he was convinced.

Never mind I hadn't pinned the blasted thing properly, so there was a gap on one side, which the darling Wonder Thing helped me sew up during the wedding service.

And I managed to split the seam on the other side trying to get the dress on (I hid it with the straps though!) 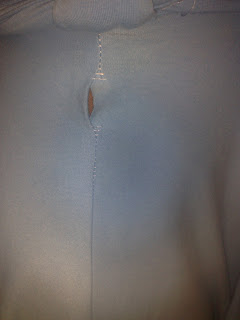 I proceeded to cut out the waistband and straps...

And then left it.

Because the instructions regarding sewing the waistband and straps on are extremely difficult to understand and that was enough reason for my procrastination.

When I did eventually get around to doing it, I did it terribly, terribly wrong and tried to enclose the circle skirt within the waistband like the filling within a sandwich, but using a tortilla wrap instead of two pieces of bread.

And then I sewed the straps on behind the waistband, over the stitches keeping the waistband and skirt together, at which point the bobbin had a small seizure (mainly because it didn't like me though).

A lot of tutorials keep saying you need at least 4-5 inches of overlap. However, for me, because of the size of my waist and other measurements, I thought that in order to fit the straps on the waistband in an adequate position for me to be able to use them, the straps were near enough on top of each other and there was only a few inches left over on the side that weren't overlapped. Which I think limited my styling options a little, because the straps constantly looked like one strap. In foresight, I'll probably rip the seams out of the straps and do them again.

My darling creation was like Frankenstein wearing make up - pretty from a distance and then slightly disturbingly if you were too close.

But you know what? I am really enjoying my Frankenstein dress. I adore the way the skirt moves and lifts gently when the wind blows without causing an embarrassing situation involving my derrière.
I appreciate the way it covered me entirely if I so desire and how surprised people were at how well it had come together.
The way the colour pops against my skin and in photos makes me bubble with mirth and, dare I say it, smugness. If I was a far better photographer, I'd probably have taken pictures of me dreamily swanning and swishing about in an idyllic field in it.
I'm incredibly proud of the fact that I made it myself and because of this, I'm not afraid to muck with it and deconstruct it all over again if I have to. Through making this dress, I've discovered another form of creating that I love (though I now despise tangly bobbins with a passion).

I'm definitely going to make one in a yellow sometime soon. 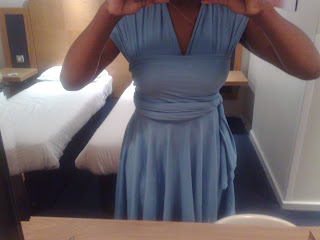 1. If you're reading more than one tutorial while you make it, make sure you read the instructions clearly and are sure of where they don't match up, so you don't end up with a Frankenstein piece.

2. Work out how much fabric you'll need. Just sketch it out roughly and make sure the maths adds up.

3. Sewing the waistband and straps on may actually drive you mad. Just be aware of where you're sewing the straps on and how it will work when the dress is completed.

4. If you're going to wear the dress to an event where you won't have internet access, you may want to practise before the event, especially since it takes a few moments to get used to wielding the straps. Stress and creativity are not necessarily the best of friends at all times and improvisation is for the brave.

5. Work out how you're going to get it on, especially if your waist is smaller than your shoulders and/or hips - are you going to install buttons? Or a zip? I went for the over the head option and felt a couple of seams pop.
It was totally worth it, but not advisable.

6. If you've decided on how you're wearing your dress, decide on how you're wearing your bra. Because, for example, if you have your bra in the halter neck position and decide at the last moment that your dress is actually going to have two separate straps results in your bra being annoyingly visible in every. single. picture that you are in.
Unless you have no need of a bra, in which case, have fun!

When the sale season rolls around, some hair sweets in dedication to the inspiration are definitely in order to make sure this dress stays in rotation....

My next project is to design [ha!] and make a dress similar to this one worn by Jessie of JessieAdore (whose blog is currently down, so I can't link you to the full post).
Isn't it beautiful, though? *sighs in delighted envy*