The Day of doing the Most: Part 1

I kind of cheated on my personal quest to put twists in for two weeks straight, since I started taking them out, and then was reminded I had somewhere to go which resulted in this style: 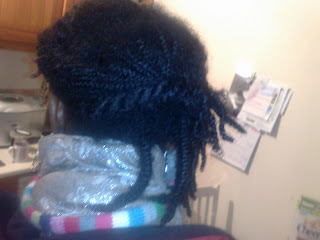 I'd started to remove the braids in the back on the left hand side, so I quickly  twisted the loose section, forming a sort of pseudo peacock fan thing.

It looks way less crazy from the front, I promise.

On Friday night, I finally took all the braids out, finger detangling to get rid of shed hair . I was happy. But also tired. I quickly did my hair in the usual lazy style, pre-pooed my entire head with Vatika oil, on with the satin scarf and then off to bed I popped.

I woke up and wanted my hair to have a little sniff of the gentle Saturday morning rain. It was less then drizzling. It was literally like soft, gentle sprinkles of icing sugar.

I wasn't too worried - If you remember, I had a head full of Vatika Oil.

Anyway. It feels like I've literally been in protective styles since, ooh, February (what with participating in the 3in6 challenge since February and the hilarious lack of sunshine in the summer). Thus, I was a little bit cheeky and let my hair out a little bit in my most favourite style from my childhood: The Minnie Mouse ears. 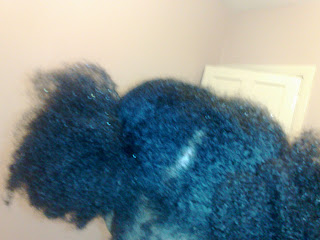 It's basically my hair split down in half vertically, with each section tied up with a hair band.
The style always used to remind me of Minnie's ears, and the fluffiness of it always appealed me. 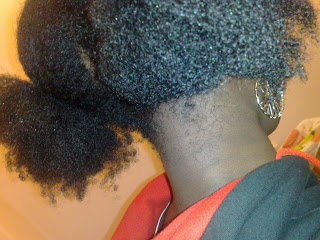 Though it's not quite yet up to the standard of Jazmine from Boondocks yet...
After jaunting about in the icing sugar rain, buying vegetables, eating falarrrfel (emphasis compulsory ) and then drinking juice with The Faerie at Lady V's, I decided it was time to go home.
I had originally planned to do the yoghurt treatment as well as a Cassia (yeah, remember those?) but The Faerie was staying over and there's only so much K-drama you can leave a guest to watch by themselves  without being extremely rude.

An all in one bonanza was my only option. I mixed 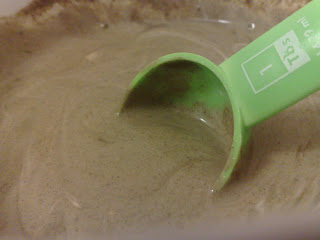 I slathered my head in this delightful mix and only just had enough stuff to cover my entire head. I leapt around my room for about 10 minutes, throwing things about in the pretense of cleaning my room, before leaping back into the shower and rinsing it all out before conditioning. I forgot how bitty Cassia is when it comes to rinsing it out.

Then I progressed onto the stretching...
But I'm tired now, so that'll have to be in Part 2.
Tweet

Labels: Hair, Mixing it up, Recipe