I don't really celebrate Halloween.
But I though this video was really cool!
*drools* Mmm....shiny lights!
Tweet
at 22:47 No comments:

I don't need much in life. I mean, I'm a simple girl. Give me some food, some water and some undies that fit and I'm happy.
However, there is currently a void in my life. A hole, nay, a blasted abyss in my existence!
What is it, I hear you cry? What could be the cause of such despair?
Well, I'm a total and utter Gleek freak. It's been out in the U.S for practically months now and yet there isn't even a peep of it over here on the other side of the pond.
I told myself I wouldn't watch it online, because The Wonder Thing and I are supposed to watch it together, but it's driving me mad.
Hellooooo? Channel 4? Yeah? What's up?! Where's my fix?!
This demands some sort of complaint! Some sort of uprising! A DEMONSTRATION OF A KIND!!
So I did a drawing. 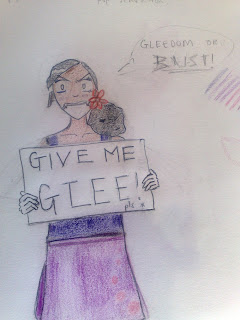 "Gleedom or BUST!" - You tell 'em, girl!
Never let it be said that the British are too tame to take action.
Tweet
at 12:21 No comments:

You know you're hair obsessed when you're considering downloading a hair calender *le sigh*
Tweet
at 10:21 1 comment:

The Wonder Thing: I heard The Buub (a term for Michael Bublé) was on X Factor last night and I missed it. Can I watch it on your computer?
Me: *nonchantly* Yeah, sure, no problem.
X Factor Narrator: ...and pop star Michael Bublé..!
The Wonder Thing: He's not a pop star. He's a pop sensation.
Me: ¬_¬
Multi-platinum selling artist?
More than 25 million worldwide album sales?
I can't even compete!
To see his performance, click here (those in the U.K can catch it on ITV replay).
Tweet
at 17:47 No comments: 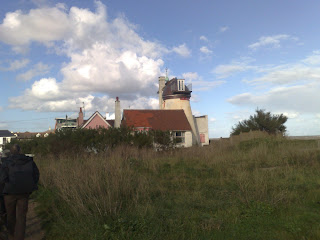 Oh, we do like to be beside the seeeea! 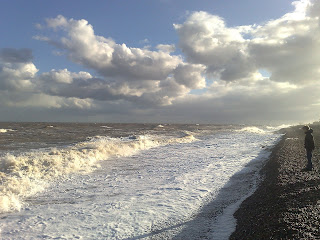 *hums the rest of the song, since she doesn't know the words* 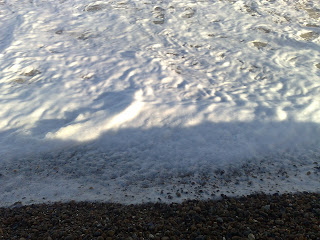 I'm sure the waves won't tell...
Hence, why these posts are so late - I was at the seaside.
You can't really call it a beach, since there was no sand.
Just your usual, English, pebbley beach.
However, this means that when the tide pulls back out to sea, it pulls about a thousand stones back with it.
As they tumble over each other, rushing back and forth, they make the loveliest noise...
Tweet
at 14:17 No comments:

Because I finally got to see Willow Smith's new video for her 'Whip My Hair' single (link updated 27/10/2010, as Youtube has now blocked it in the U.K. Boo hiss!). And it's stunning. I adore her confidence in the video, and the bright colourful aspect of it.
Using her hair as a paintbrush? Inspired.
I bet even Mr Incredible is whipping his head to this, with his rubber necking self.
But then again, I also like the Sesame Street 'I Love My Hair' video. It's cutesy and lovely and makes me feel all gooey inside. It's telling you to love yourself just as you are. Beautiful.
Which one to post?
Which one to post?!!
Oh.
Hello Ms Mash-up. Nice to see you.
Compromise for the win!
Tweet
at 08:20 No comments: 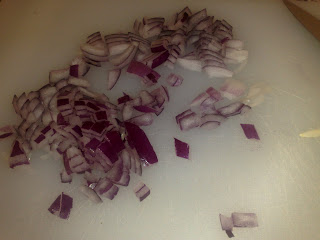 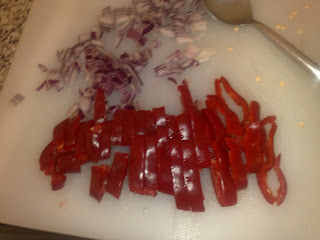 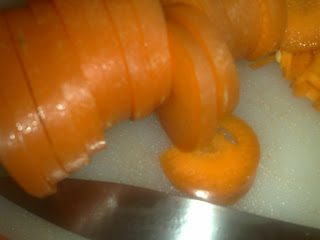 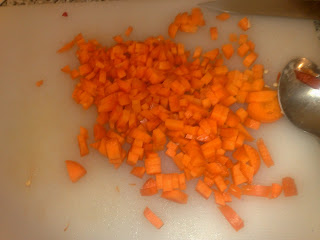 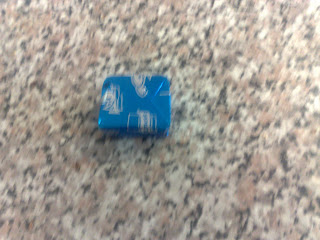 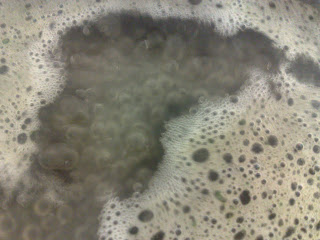 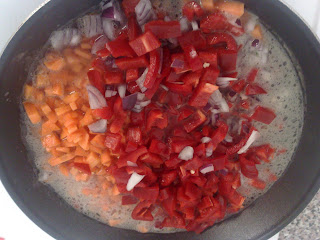 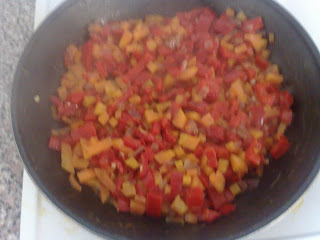 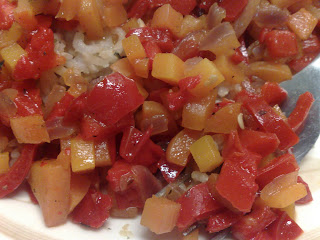 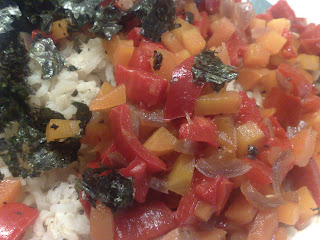 Well, less of the horror, but they're a bit messy and certainly bordering on the terror.
Two weeks ago today, one of my favourite aunts put my hair into twists.
It was so painful, my eyes started running (I don't cry).
She did all the stuff I'm vehemently against: Using some gunky, beeswax and petrolateum based gel that she uses in her locs to do the twists; she combed my hair dry; and when she combed it, she dragged it from the roots upwards.
As if having to experience my hair being pulled out forcibly wasn't bad enough, I could bloody well hear them as well, like a bleeding rice krispies advert:
Snap, crackle, pop!
Hello A Simple Thing. Meet Hair Hell. Hair Hell, A Simple Thing.
I even got tapped on the head with the comb for shifting about!
Afterwards, I was like, no, I'm too old for this shiz.
I admit, I thought I looked cute. 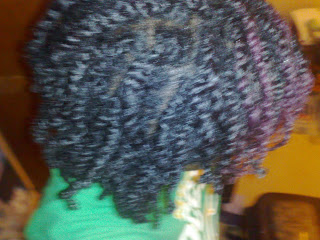 But I had to take two paractamol to deal with the pain.
I repeat: I'M TOO OLD FOR THIS SHIZ! *throws a tantrum*
I generally tend to hate it when other people do my hair, since they never listen to me, and think they know best and it all goes terribly Pete Tong (cockney rhyming slang for 'wrong') and I suffer for a day and then take it out.
However, due to the trauma I suspect my hair went through being combed, I decided to leave the twists in for a month. No physical manipulation. Apart from the regular stuffs and fiddle-ation.
But it's going on the third week and it's looking like a dog's bark: Ruff! *snickers at own joke* 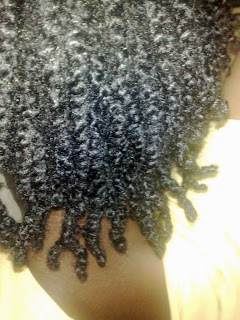 So I've been tying a scarf around it, in a style I like to call " The Backwards Babouska": 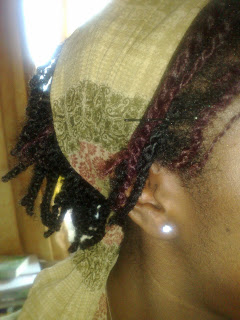 If that fails, I go with my hat (that I actually made myself - I may post a tutorial in the future). A satin bonnet underneath is necessary for protection and avoid fluff-in-hair-itis.
But then, I just couldn't take it anymore...and I took them out *pops a fudge piece and dares you to judge her*
The tiny size of the twists has resulted in a crazy twist out. I don't think it's safe for public consumption. So, no pics. Desolée!
I think I'm just going to wear this twist out for a while...maybe until a bird mistakes me for nesting material or something....
Tweet
at 15:38 No comments:

One of my friends was the original inspiration for me to go natural, and she wrote kind of mini interview about her hair here.
If you're a bit of a newbie or a transition, you may find it helpful for advise and stuffs ^_^
It's basically my hair philosophy in a nutshell. Which is weird, because I haven't spoken to her about hair in about 7 years!
I just thought it was nice and got all excited when I saw it, so I thought I'd share :)
Tweet
at 12:30 1 comment: 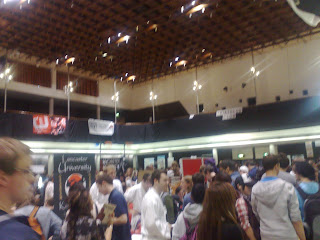 We gave out over 500 leaflets for our society. I had to keep running to the library and printing off more. I fail at Presidential delegation. 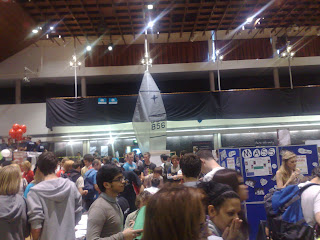 There were so many people!
And we got over 100 e-mail sign ups. So, I think this was a pretty good Fresher's Fair. And our stall did rock.
And more importantly, the freebies! Whoo! 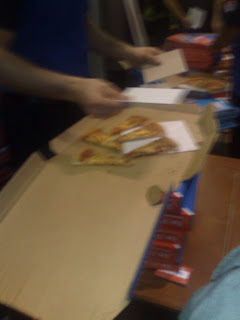 I didn't jiggle the camera. That's how fast the dude was handing out free pizza.
Promise.
One of the staff on one of the stall's did her own seasonal make - up. 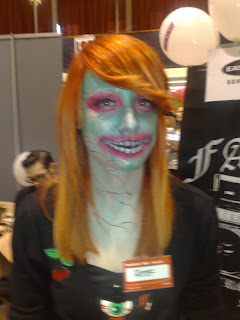 As I didn't love their store already.
A Jack Daniel's cowboy hat that some stall was handing out. 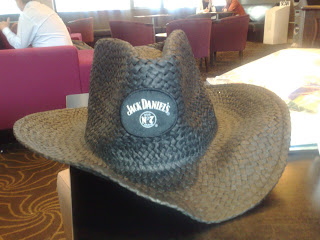 They'd run out of sombreros, which made me sad.
Now The Wonder Thing and I can't match.
My friend BeeBee, styling the aforementioned cowboy hat in an appropriately suave manner. 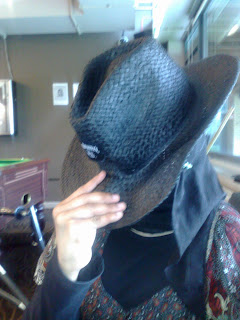 She was so insanely enamoured of the hat I had to give it to her! 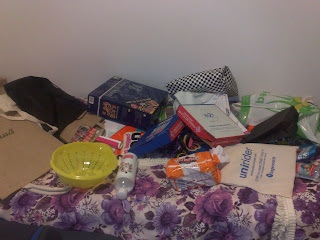 All the swag I dost picketh up from the Freebie fair (minus the hat).
Yes, that is a loaf of bread in front.
Surely you know that bread is a staple product for 85% of British students?
Tweet
at 15:17 No comments:

What with all the ruckus I've been causing at home this summer, I nearly forgot about one of my university friends.
He sings like an angel (fortunate, since he was named after one).
He slays womens left, right and centre with his lovely and sweet personality.
He's - he's -
You know what, words just don't do justice.
Here's my boy from Brixton!
Tweet
at 15:19 No comments:

*Puts on gangsta hat*
Coco and Creme wrote a little article on 'Fly International Chicks'.
Getchu a piece.
'Cos it's wicked, innit?
Normal language will be resumed on Monday, when I have recovered from unpacking (>.<)
Tweet
at 19:24 3 comments:

I should be moving onto campus tomorrow (and technically, I should be packing now).
Agh! Last year of uni!
I thought I'd write a list of stuff I want to have achieved by the end of this year:, academic and otherwise:
- Have an awesome stall at Fresher's Fair!
- Get a high 2:1 (above 65%) or a 1st in my degree
- Quit Theatre Group!
- Finish my dissertation
- Get onto a PGCE
- Cut cake making down to once a month
- Get my bento making game up to scratch!
- Be able to have a gentle conversation in Mandarin and/or Japanese
- Help my college team get 3rd or 2nd place in the league.
- Stop getting sucked into the ridiculous drama of a certain friend group(s).
- Focus on the Belly dancing society properly
- Stop ignoring my commitments. Or, stop signing up to so many (sssh, pretend we don't see the irony!)
- Hit Bra Strap length with the hair
- Learn to use the family camera (because my camera phone is pants)!
- Run a 5k....? Okay, maybe that's reaching a little bit.
I mean, there's goals, and then there's dreams...
Anyone else got any targets they're aiming for by summer time?
Tweet
at 16:00 No comments: