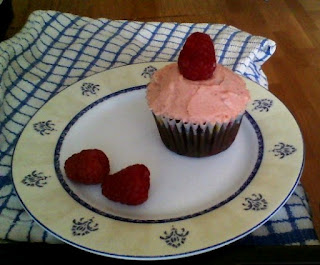 When I was younger, I had a friend. We adored each other, as friends tend to at that point in life and friendship. If I received a text from this friend, I would drop everything to go and just hang out with her. There was actually a point where I semi-moved into her bedroom - my things stuffed under her table in preparation for my inevitable arrival at some point during the day.
Unfortunately, at this point in my life, that closeness has evaporated; the opposing tug of our differing duties pulling us into different areas.

We drifted apart for various reasons. The tragedy of this split is that it was entirely preventable; we just stopped holding on. She stopped caring and I didn't have enough time to prioritise fixing the cracks that appeared. Our ships have not yet crossed paths again and I don't know if they ever will again.

One thing I do know was that she loved raspberries - they were her favourite fruit. She shunned strawberries as mainstream slackers that could not live up to the sharper, sudden flavour of raspberry. Looking back, I think it was like a fruit microcosm of her personality.

I, on the other hand, was a renowned chocoholic with a famed sweet tooth that lent itself to my baking.
For some reason, I never baked anything with raspberries in it during the duration of our friendship.
Her birthday is coming up soon and I got to thinking about what I would have made for her in celebration. If we still hung out.

If we were still friends. 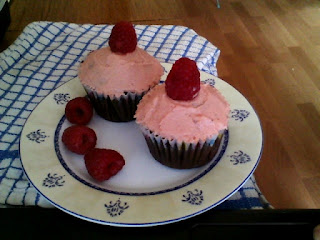 And this recipe is perfect - the chocolate is dark and rich, gently muted by the raspberry buttercream frosting.
You can drop the raspberries into the batter before baking them or you can cut the cupcake open afterwards to insert the raspberry jam. Because the icing turns out pink from the raspberry jam, people always think it's going to be sweeter than it is. It's a surprising and refreshing surprise!
Since first making this recipe, I've made it about 5 more times, not including the birthday request - they're very popular.
And if you share them, you will be too!

Preheat the oven to 350 F/175oC/Gas Mark 4. Pop the cupcake linkers into the muffin tin or grease them up to get them ready for the cupcake batter.
In a large bowl, whisk together the flour, cocoa, sugar, baking powder, baking soda, and salt.
Add the egg, vanilla, sour cream, oil, vinegar, and hot water.
Mix everything together until the batter is smooth. Put a dollop into each case.
If you're using fresh raspberries instead of raspberry jam, you should drop two into each case and then cover them in batter. If you forget and plop them in at the end, they'll float to the top as the batter rises and ruin any chance of a dome you've got. But it you don't care [I don't], it doesn't matter.

Prepare the icing/frosting: In the bowl of a stand mixer, fitted with paddle attachment (or any large mixing bowl, if using hand-held beaters), beat the butter on medium-high speed until creamy (about 3-5 minutes). Add the icing sugar and beat well to combine. Add the raspberry jam and then beat until smooth. Cover and set aside until ready to use.
You can do this with a wooden spoon if you have patience and incredible strength [always remember to use butter at room temperature!] but be careful to beat the butter well, or you'll end up chunks of it in the icing.

If you decided to use raspberry jam instead of the fresh raspberries, you can then fill the cooled cupcakes any method you prefer - but I use this one.
Then slather the icing on top. I'm not usually a fan of icing, I tend to find them overly sweet and sickly, but this one complements the cake really well.