"It is difficult to see why lace should be so expensive; it is mostly holes."

Fortunately for me, it was on sale for 30p per metre. So I got a metre, along with a metre of  chunky elastic for 75p to make a headband.

I've been meaning to do it for a while but could never find anything I liked enough to actually wear.

I folded the lace material in half and then cut it into two, as I was intending for it to be a double headband and wanted to be able to sew it at whichever angle I wanted. I measured it around my head to make sure it would fit and see how much elastic I would need. Answer: Not a lot!

Excited at the prospect of making something practical and yet pretty at the same time, I sat down at my sewing machine. I eagerly looked forward to the winsome air I would achieve whilst wearing this headband - I would be both cute and charming.

It was at this moment I discovered how difficult it is to sew 1mm of lace with a sewing machine.
After the bobbin started throttling itself with the thread, and the machine started tangling up the cotton lace or just not sewing the two elements together, I decided to hand sew it together. My hand sewing skills are disgusting but I hoped that as the evidence would be behind my head, then nobody would really notice. 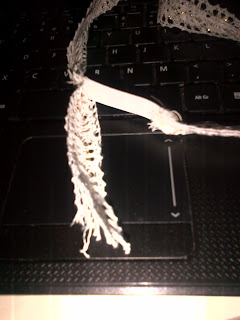 Finally, 45 minutes later, I was done. Despite the plainness of my ponytail, I decided to try it on.
The gold thread glinted gloriously, highlighting the contrast of the white against the deep dark of my natural hair colour. The effort had been worth it for this precious moment of victory! 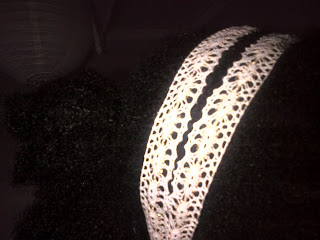 And then the next day, I promptly lost it.

You've got to be kidding me, I sighed to myself. Not again!


Oh well. Turning to other crafts to keep my sanity and self-confidence... 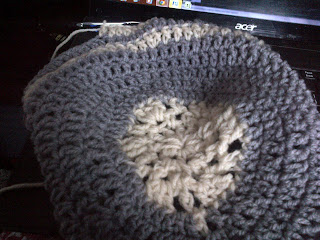