I am not a seamstress

Usually, I pick up a craft every summer and teach myself through books and stuff how to do it. So far, I've picked up knitting and crochet.

for this and last summer, I've been trying to take up sewing.

My first attempt at a real project [that dress doesn't count] was to create continuous bias tape. Basically, my end result should have been a long, flowing piece of material. 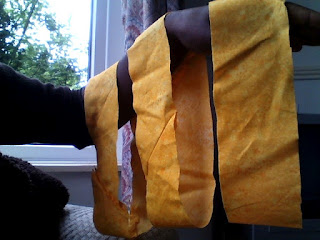 I ended up with three loops.

I don't....I don't even understand how that happened. And now that fabric has gone walkie, so I can't even rectify it.  It was last seen being mucked about with by my house mate's kids, so who knows where it may be now? My grand mistake, fluttering around a skirting board somewhere in the house.

Then I decided to try some appliqué. I bought some interfacing and stabilizer.

At least, I thought I did. Desperate searches showed no sign of the stabilizer, but the interfacing was still present. I was confused because I was so sure I bought some.

Giving up, I ordered some from an on-line seller...

Only to find my already-bought buried under a pile of books behind my door.

I am thwarting my own efforts with my scatter brained nature.
My efforts to learn how to sew better than a 4 year old continue.
Tweet