Four Months, where did the money go?

Since everyone is taking a look at what they want to change and what they want to improve and leave behind when the bells of the New Year toll, I decided to assess the financial damage I'd done in 4 months. As a student, I keep tabs on my money. I've got to. It's the way I roll.
Therefore as a student with mild control issues, I keep a budget, so I know what I've wasted spent my money on. Wanna see? Here's a slice: 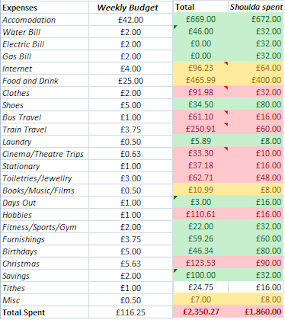 This is the condensed version. When it's green, it's good, but when it's red, it's ridiculous. A lot of the budget amounts are things left over from my incredibly strict undergraduate days, so it needs tweaking to be more realistic.

But on a more positive financial note - I finally set up my ISA! Yay! My grand plan is finally in action!
Whoo-hoo! So far all I've contributed to it is £100 of my own, and £600 of my overdraft. It's okay since I'm a student, I don't get charged for going into my  And I do plan on giving it back, after I collect the interest on it, so it's all good.
Definitely something I should be keeping an eye on in the New Year....
Tweet