I took the braids out on Sunday, which makes it nine days.

The cornrows were looking a little wild and I was getting tired of the half style in general, so I took it out, using only my weird experimental grapeseed/Vatika/castor oil mix, because I hate wetting my hair.
It took me about 6 -7 hours of One Piece watching before I was done.


Then I washed my head that same night (I started taking it out in the afternoon, since I'd been playing netball all morning), conditioned with Tresemmé Naturals and then added my beloved Giovanni's and some aloe vera gel and the weird oil mix. I took the opportunity to do a search and destroy method, cutting out knots and split ends wherever they did pop up, which meant cutting up to an inch in some aresa.

The next day, which was Monday, the Faerie had to go to for an interview and Lady V and I were her morale boosting, joke cracking, doughnut purchasing escorts.

So I decided to make an effort with my hair and did a cinnabun [video tutorial here]. 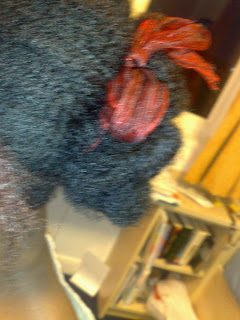 Then I grabbed sections of hair in the puff bit at the back, loosely twisted them around themselves from the base (to make a cleaner look. If not, random pieces of hair at the base start doing their own thing and trying to go their own way and it looks hilarious) and then pinned the end of the section near the base of the section with a bobby pin.

I hope that makes sense.

I doubt it does.

This helped me create a semi-uniform look on my cinnabun buns, since my hair is differing thickness and length all over.. 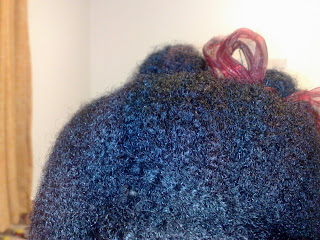 Lady V: The middle looks like a daisy!
Faerie: It looks so touchable! And squishy!

I think I managed to efficiently carry out my morale boosting duties. 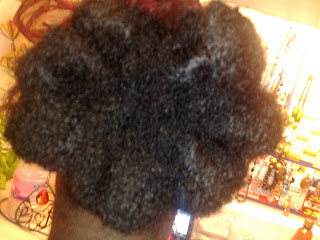 See, using black bobby pins means you can't see them! Yay! And ignore any sign of 'shine' - that's purely the flash and my desk light conspiring together.

And then I took it down and resorted to Pajama hair - less pins and waaaay easier to sleep on.
Tweet