Term 3: When it all goes Pete Tong

When I think about my grand plan, and the actual reality, I get slightly overwhelmed with sorrow and want to lie down and not get up.

Athriftymrs was not joking when she was talking about how organisation = being thrifty. In the last week, I lost something and the costs and repercussion costs amount to more than £150.

So yeah, being organised spatially does help you out when it comes to things like saving money.

A few months ago, one of my house mates asked me whether I was task or people orientated.
I immediately said task-orientated - I love having goals and working towards them.
But. I'm not a robot. In order to have been completely task orientated, I would need to ignore a lot of people.
And be heartless enough not to cover people when they're standing in front of you, looking into the depths of their purse/wallet/pockets.

I feel I should mention this.

Because these last three months have been a bit of a financial car crash.`

I'm trying to take the stance that money spent is money spent and there's nothing you can do to make it come back. In the end, it never really belonged to you anyway. 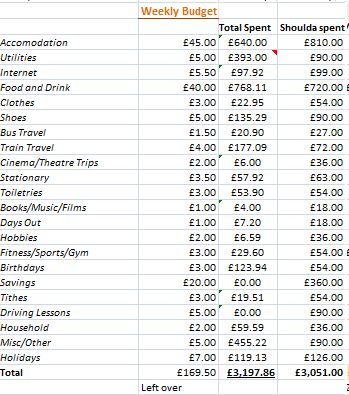 I feel like I should be a bailiff because people be owing me money.

The Good
Only went over on food by £40, which considering how much I ate is pretty good. But I did have to change my weekly budget to accommodate it...
I was bang on track with my toiletries and stationary too.
I know it looks like my social life died a terribly poor death but it's actually reflected in my food costs...because I ate out so much.


The Bad
No savings...(which pretty much explains how this went).
And yeah, I still can't drive any better than last year. But I'm not contributing any carbon emissions, so I guess you could see that as a plus.

The Ugly
One of my house mates owes...a lot for bills. There's not much I can do in that scenario except hope she eventually pays up - I'm not killing myself over it *le shrug* But even considering that, divided by three, that number is faaar too large.
As well as owing me a lot more for having to buy furniture - I put it under household, which explains that mess.
And the fact I (and my other housemate) sprung out more on household stuff because she was broke all the time.

Not that I'm bitter.

But better believe I'm looking forward to maybe living by myself next year.
Tweet