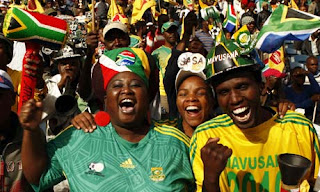 Not only have Google changed their icon but Youtube has too. Therefore, I think I can officially say that World Cup fever has hit.
I went into a local supermarket and it seemed every magazine had 'Come on England!' splashed on the cover.
In the toy section, England flags hang proudly for the patriotic youth of today.
There were even Pringles signed by Peter Crouch (a footballer whose existence I'm only aware of because newspapers keep referring to him being lanky and dancing like the archetypical embarrassing father).
Et tu Pringles?
No, but seriously.
PRINGLES, for goodness sakes?!!?
Not even my crisps are safe!
Oh, wait. Apparently, there's an advert. See it here.
The BBC estimates that about £1 billion is about to be wagered on the World Cup - one guy has even wagered £200,000 on it.
Really?!?! He could have bought me a house for that amount (especially in this economic climate). Or a car! Or a new wardrobe. Or a house made of cupcakes. Mmmm....cupcakes....
There are some positives - I mean, it's the first World Cup to have been held on the continent of Africa! So much excitement...I...can....hardly...breathe! *grasps chest*
(I lie. I'm not really that bothered). A lot of people I know are hoping that this being the first World Cup to ever be held on African soil means that the African teams will get some sort of Motherland football boost, helping them soar across the grass, as fleet as foot as is superhumanly possible, blasting the footballs into the back of the net with no hesitation or obstacle!
Orrr....not? (Sorry Dad. But I gotta keep it real).
On the negative - it's South Africa. The media (*coughBBCcough*) present the World Cup as a positive that outweighs and negates the infamous negatives of apartheid and xenophobia that plague the country - just like the story shown in the movie Invictus, of the country united by the Rugby World Cup, under the green and gold.
This was the first major sporting event that the South African national team were allowed to take part in, only after negotiations were made to dismantle apartheid.
But will the World Cup serve only to unite this country permanently, or only for its duration?
Local businessman Lesego Segoe sums it up when he says, "We are excited about the World Cup because we will see international players but what happens after the World Cup? What happens to the poor, what will the World Cup do for them?"

That quickly took a ranting turn.

You know what, no.
I'm still bitter that guy didn't buy me a house.
Tweet