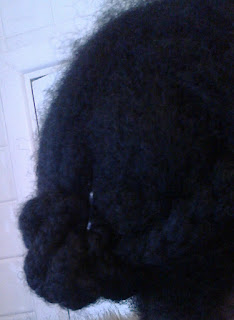 A simple bun with plaited ends ends plaited/braided and pinned to my head. I smooth my hair down into a ponyail, split the ponytail into 4-5 sections and then plait each section. Then I treat all the plaits as one ponytail, wrap it around its base and pin in down in several places.


It's been so easy to maintain - I put a scarf over it at night to keep the front smooth (not sleek - that's far too much effort and is often, in my case at least, counter-productive) and spray it with a..well, spray every morning, tie a scarf to stop the curls springing up in raucous joy and celebration and then by the time I take it off at work, I'm sorted. When it gets a little frizzy, I undo the plaits, add a moisturising cream, seal with my aloe-shea butter and plait it back up. I don't detangle when I do that (well, not properly. There's some light incidental detangling, but that's it). I also don't object to getting it wet in the shower (read: dunking my head under the shower faucet at least twice a week).

For the sake of moisture. Clearly.

I don't know when I'm going to unravel this style and deal with the detangling monster but that's a problem for next week really. Future Simple Thing can deal with that.