I would like to say that I didn't spend the last week in five or six huge plaits/braids. 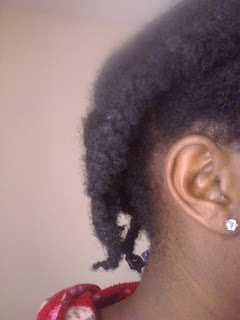 That I jazzed it up and made it funky and fabulous.

There's definitely a reluctance in the natural hair world to walk around looking like 'Felicia' (whose identity I only discovered towards the end of 2015), wearing simple, almost childish, plaits/braids that are not full, plump or deserving of envy in anyway shape or form. I remember reading this post a few years ago about the struggle between looking polished and retaining length and nodding along vehemently in agreement.

Well, my life at the moment says poo poo to looking 'polished' in that way.

Because it's in plaits, I didn't really want to touch my hair. I pinned the plaits up, and have been moisturing with an aloe vera gel and water spray mixture. I also patted on some Eden BodyWorks moisturising soufflé (trying to avoid rubbing), but apart from that - nothin'. Minimal.

It's lasted me through 5 days of anxiety, over 2 hours of frantic sport, and a few late nights copy-editing 60 pieces of work.


No, definitely asking too much from this hair style.

Having been reminiscing on blogs I used to read, I stumbled across this cute ol' post. So I put my hair into two ponytails (moisturising with more soufflé and aloe vera juice and water as I went along) and banded the length. The little bits on the end are plaited and then twisted when I ran out of hair. 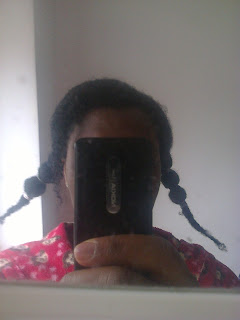 Then I rolled then around themselves and pinned them down on the side of my head. It did me well for a day (despite the Princess Leia references, natch) but one of them kept unfurling despite the pins. 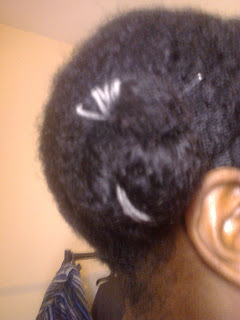 As I was to be running around on Sunday, I felt I needed something a little bit more secure, so I unfurled the buns and pinned the banded ponytails behind my head instead.