This is not a review. This is more a 'my first time mucking about with a sheet mask' post. 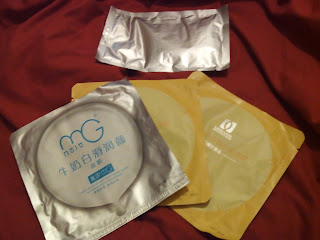 One of my Chinese friends went back home a while ago. As a thank you for helping her pack, and as a way of getting rid of some luggage weight, she gave me these sheet masks.

I'd been a bit dubious of them (I can't read Chinese script - wait, whitening? Is that the mandarin for cow on the front? WTH is this??) but this week had been more than a little bit long and I wanted some pampering. Thus I took the blind leap of faith and decided to have a go anyway with the (non-whitening) 4D collagen anti-wrinkle facial mask. 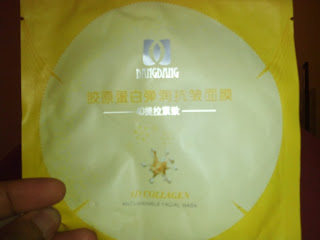 Do NOT do this. I am not a dermatologist, nor am I a doctor. However, I AM very simple and it was only afterwards that it occurred to me that I could have had an allergic reaction. On my face. Google 'face allergic reaction' if you need to take my warning seriously.
Make sure you know what ingredients are in your product - use Google translate to have a look or look for reviews on the brand and products. I did a quick Google on this product and all I found was this.

Anyway, the first thing I noticed was how slippery it was. Literally soaked in whatever serum/essence/liquid you are supposed to be hydrating your face with. I'm rubbing my hands with glee at this point because central hydrating is both a boon and a bas - er, pain in the butt.

According to the Wonder Thing, the 'growth' on the bottom was for your neck and bottom chin area.
My head was far too big for the ear hole loops (they sat on my cheeks, and made it nowhere near my ears), so I just smoothed it on my face and proceeded to serve serial killer realness whilst surfing the web.

It was really cooling on my skin, which my constantly inflamed, dermatitis-suffering body absolutely LOVED. I didn't itch at all whilst wearing it, which was AWESOME because normally, I am aflame and scratching (I've been scratching badly since October, so any relief is greatly appreciated). I could breathe easily and the smell wasn't too overpowering, which was my main concern. 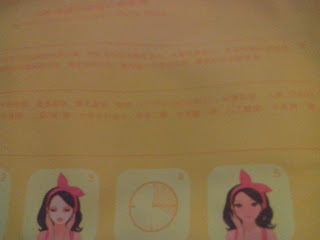 The picture instructions said 15 minutes, so I clearly forgot and probably took it off after 30. It dried pretty quickly on my face (whatever it was saturated, I mean) and the mask was still moist, so I dabbed it on my décolletage. My face felt quite hydrated, compared to its normal thirsty self. I didn't feel I needed a moisturiser afterwards. I had two spots on my chin caused by rubbing on my winter scarf fibres (and subconscious scratching during the night, natch) and I've just rubbed at them and the one of the left is completely glossed over and smooth feeling, while the one on the right feels smaller and hasn't caught on anything (else) today.

I noticed the next day, in the shower, my face felt....slippery? As though the dried product had been re-hydrated. Later, I noticed small mustard coloured bits on my face, as though I'd missed some tiny bits from a peel off mask or I'd been eating cake and had gotten crumbs on my face (which, let's be honest, is more than likely, but I was about to start on, rather than having just finished, the cake, so I plead innocence). I think with a proper cleansing (ergo, not just rinsing with water and optimism) they would be slicked off.

This particular mask I wouldn't purchase again (too small! Don't understand it! Fabric had to keep on being adjusted and smoothed on! Random mustardy bits!), but it has definitely peaked my interest in the sheet mask experience in general. I don't think they're going to do anything major to my face, but I prefer this idea to masks you have to slap on, then rinse off.
Tweet