When one moves to a new place, the natural instinct is to explore it and check it out. Ascertain what your favourite shops and places and where they may be.

It's always nice to have a little bit of information.

Fortunately, Cassie of NaturalSelectionblog.com has already written a short but informative piece about her hair related travels in Paris.
Boom, instant guide to hair care in Paris.

Obviously, my first stop as a wannabe mixtress was AromaZone.

It was exactly as described, though a lot smaller than I'd imagined. In my mind's eyes, I'd envisaged it as a ingredient emporium, but it was cosier than I thought. All the ingredients were separated into sections according to their purpose and then neatly lined up alphabetically.
I'm not exactly a diplomat when it comes to the art of the French language, so I have to admit that my knowledge of the Latin names of ingredients really helped.
So much stuff! There were testers too, so you could immediately feel the texture and smell the different oils (eurgh to raspberry oil - not as tasty as I was hoping!).

As well as the typical 'health food' shop products, they also have emulsifers, hydrolats, containers and neutral bases for the more serious mixologists; indian powders, henna, and their own line of handmade cosmetics too. There
I went to the sample area and bough some aloe vera (which I later found out was cut with sunflower oil/helianthus annus - sigh), brazil nut oil, some vanilla scented sesame oil (so scrummy smelling! Has bits of vanilla seed floating about inside) and some green montmillonrite clay - I'd been running low on bentonite clay (and it was reduced, so...). They're all under 2,00€ for a 10ml sample of anything, if you want to try before you buy, which I thought was more than reasonable, considering that most of them are organic (bio). 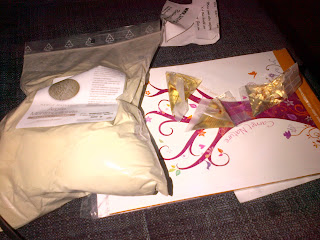 That was only on my first trip there, but we'll talk about the rest later on :)
It's easily reached by the metro - Odeon on ligne 4, Maubert Mutalite on ligne 10. Check to be sure..

Next up - Saint Denis Strasbourg!
That was all Cassie had mentioned, so I hopped on the Metro to the stop. My first experience upon exiting was different because I'd gone to the wrong stop - if you want to get the exact same experience as her, of emerging in front a fair and white skin bleaching shop, go to the Chateau d'Eau stop, not the Saint Denis Strasbourg one.
This will also mean that you don't end up lost in a labyrinth of clothes shops too!
When I finally found my way back to the correct, hair-related area, I did get a few guys asking me to enter their shops to get manicures, pedicures  (not so much with relaxers, since I was in mini twists). I just insisted I didn't speak French well.

One guy was really insistent, so I simply stared ahead and said 'Non, merci' over and over again whilst walking away.
Some of them will approach you as soon as you get off the metro train, even if you're only changing over to another line!
It's far more annoying than it is scary.

I found that the hair shops were incredibly similar to many of the hair shops I'd frequently back when I lived in London, though I did find one that sold Jane Carter hair products for under 20 euros each. I don't know if that's good or not; I just know that I was surprised to see them there.

I'll admit - I chose which shops to enter based on size. The bigger shops tended to have a bigger variety.

I went to look for the 'Little India', which I assumed was Passage Brady, but at the moment there's a lot of construction going on and only a few restaurants were open.
So I called it a day and went back home.

However, Cassie's article has proved to be incredibly helpful to me - I literally can't imagine what I would be doing if I hadn't found AromaZone! I've been back twice already (or is it three times...?)
Tweet