Or braided up. You know what I mean.

You know who I blame? I blame pookinapp16! I was watching this video and I was thinking:

"Wow. Her plaits are so cute. I should put plaits in and then.... I will look cute."

Evidence that far too much staring at a computer screen will lead to delusion.

My hair was slightly stretched from twists though not much.


Also, taking pictures on the back of your head on a webcam is really hard!

I don't have a blow dryer at university, because I've never really been interested in blow drying (hot scalp! Ooowwwwch!). And I didn't part my hair when I started plaiting/braiding, because I'm lazy.

I did it on clean, dry hair, maybe semi-stretched from the twists.

All I used for styling was Vatika Oil, and when I ran out of hair halfway down, I just started twisting.

When I put the first one in, my thought was - "Huh. Maybe that's a little small".

After an hour, I had my front fringe/bangs section done. 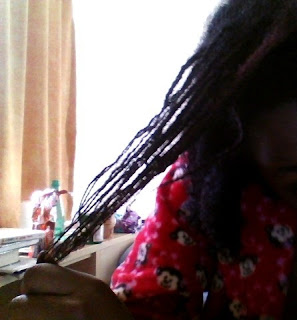 By the time I'd finished for the night on the first day, I was ready to kick myself stupid. 4 hours of braiding (and de-tangling, and faux-parting, because my parts just never seem to work, and ripping my hair out) later and this is what I had. 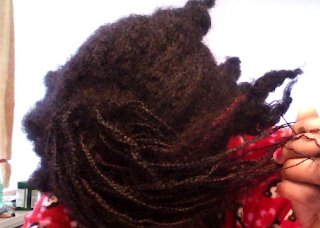 I finished the next day, at about 4pm. Considering I was also agonising over an essay, my timing was not the best, because even for the best multi-taskers in the world, typing and braiding would be difficult.
Unless they can braid one handed.
Oh my goodness, is that even possible?!

Now for the million pound question - Why did I do this to myself?

a. I'm a masochist

b. I have no realistic sense of time, space or my limitations as a human being.

c. I thought it would be a lark

Since I was going home the next day, I decided to wash them while I was at uni (and still had time), and I felt I went a little overboard with the Vatika, so the only picture I have from the first week is just after I washed it.

It was a LOT of manipulation - my floor was covered in hair, which was disturbing. I shall not be surprised if I take these down and I'm actually bald.
But.
I really like them! I keep whipping them back and forth to stuff on the radio, but it's actually nice just to be able to tie it up in a ponytail without having too much effort.
Also, my mum is pleased with it. YES! She wasn't too impressed with my partings (for obvious reasons - there aren't any) and said that I should take some down, so she could redo them.
I remember the hair on the ground.
And then I said I was disinclined to acquiesce her request.
At which she cut her eyes at me, but the hair was left undisturbed and just as messy. To be honest, having fine hair means that partings often make me look extremely scalpy in certain areas, so I prefer the messy look.

At the start of Week 2, it looked like this:

Still kind of neat, though the ends had coiled up (since they were twisted)

I'm currently in my fourth  week and the braids are definitely a lot fuzzier - washing twice a week probably didn't help much. To be honest, I don't mind the fuzz. The more this style has aged, the more I've liked it. I've also appreciated the flexibility and ease when I've had to wake up early to read through my work again and make sure that all 15,000 words make sense.
Joy.
Tweet