After a week of having my hair out, I decided to do the decent thing and put it up in some sort of protective style.

Braids! They kept my hair stretched and mildly tangle free. Of course! why did I ever abandon them?

Oh, because my fine hair means that I lose all bulk and volume. 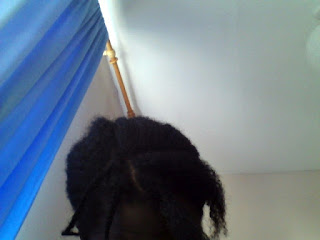 After doing those 3 that you see above, I got fed up and took them out. And I didn't feel like putting twists in either - the prospect of putting them in only to have to take them down in a month or so did not appeal to me.

Surely, I thought to myself, surely there has to some way to do this....maybe avoiding the twist and braids method I usually employ.

So I wrote down some guidelines for myself for the next two months, until the end of August.

1) I will wear a 'protective style' for 2-3 days at a pop. Braided styles have to last at least three days.
2) By protective, I mean I don't [or shouldn't] have to touch it for that time.
3) On the take down day I'll moisturise - by doing a herb rinse or conditioning or just using moisturiser.
4) Styling shouldn't take more than 1 hour every time.
5) My ends should not be rubbing up on my clothes or scarved.

We'll see what I'm saying at the end of August.


I started off with my usual, lazy, pajama hairstyle, did a quick conditioner rinse in the shower but left it in the style to dry through the day and then put it into what I always called a Pinwheel bun - basically, a ponytail where the pony is cinnabunned/pin curled and pinned under. 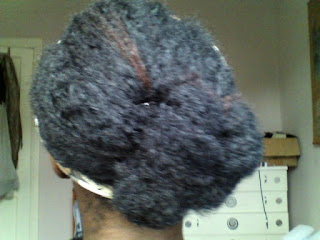 It's weird how brown my bleached/dyed hair is in this picture! That colour is barely visible when you see me in real life.

Dimples does something similar in this video.

I wore this from Sunday till Tuesday, then conditioned my hair with some cherry blossom scented conditioner, moisturised on both sides with different conditioners [left, hollands & barratts brand and right giovanni's direct leave in] before sealing with some oil and banded overnight [I'd gone to the gym and had to meet up with friends, so did not have time to do anything. 5 minutes banding then done!]. 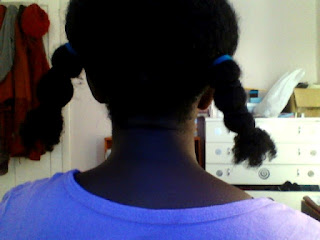 The next morning it was so not dry but we'll pretend it was. 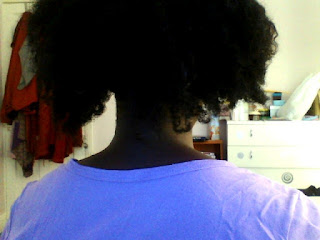 Then I decided on a big plait that wound around the back of my head. They call it the snail braid on thebeautydepartment, though I have to say I was definitely inspired by The Grecian Goddess Braid by Laila of fusionofcultures. 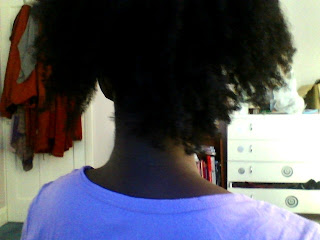 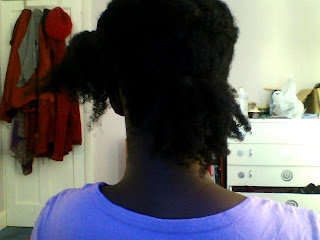 It was kinda difficult for me to do because I can't see what I'm doing and my arms got tired and I forgot what one strand was doing in comparison to another. Taking pictures really helped me see what I was doing.  When I wasn't happy with my work, I removed it and started again. 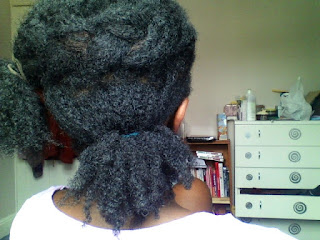 When I forgot what strands I'd been holding, it showed in the plait, because it stopped being a plait and ended up as a chunk of hair and where my arms tired, the plait dropped.: 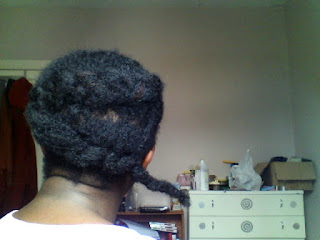 Eventually, I ended up with something I was happy with. 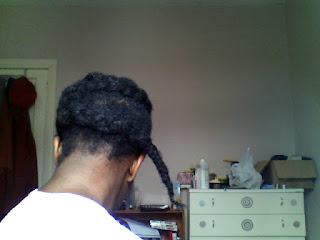 Pinned the plait back on itself with plans to keep it in till after swimming on Saturday! 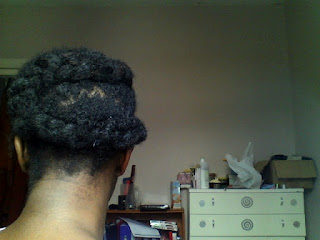 Maintenance?:
Patting on some coconut oil on the....third day, and then spritzing with a herbal tisane.
Tweet