On Sunday, lazing about, the Wonder Thing and I were lying about, probably on Sporcle,  when he remarked "Why have you got sand in you hair?"

Then he started picking at whatever was in my head and then my insides and my very soul screamed:

I don't know if it was the epic amount of shea butter or gel I slicked down on my head last Thursday, or the dodgy clay mixture [Aha! The purpose of the ominous music is revealed] but there was flaky, build uppy stuff. Basically, the story ends with the Wonder Thing leaving and me washing my hair.

When I took my hair down from the bun style, my hair was stuck together, matted and tangled. Thanks shea butter.

In fairness, it had been extra moisturised too and I'd been considering wearing it until swimming on Thursday - ergo, FOR A WHOLE WEEK.

I was slicking on some coconut oil, as a anti-hydral fatigue pre shampoo treatment and then I realised that with all the shea butter up in my head this may be a waste of time. So I continued on, finger de-tangling instead in order to justify the coconut oil use, separating my hair into about 8 twisted sections as I went.

Then I leapt into the shower, removed my cape and started sudsing up with Anita Grant's Kelp and Ylang Ylang Babassu shampoo. This is what I use when the gentle touch of bentonite isn't enough [or may have caused the problem - darn bootleg bentonite formula!]. I made  sure to get both my scalp AND my hair *gasp!* Then I used my trusty sidekick, Tresemmé Naturals conditioner to add some slip to the situation, as I continued on with the de-tangling situation. I was in there for 40 minutes, which is twice as long as I usually spend, but desperate times...

I scrunched with a T-shirt I had lying around [my microfibre towels have both gone walkies]. Then my Felix Capillus + more Tresemmé Naturals went onto my damped hair, along with a lot of Aloe Vera Gel. I'm kind of experimenting with 'sealing' with Aloe Vera Gel on top to see how I fare. So far, so good.
Then I did a flat twist version of my pajama style, because I had to leave the house

I did consider wearing the flat twist pajama style for longer, but on Monday, decided to do something different.  At first, I tried to do the beauty department's Inside Out French Braid style. 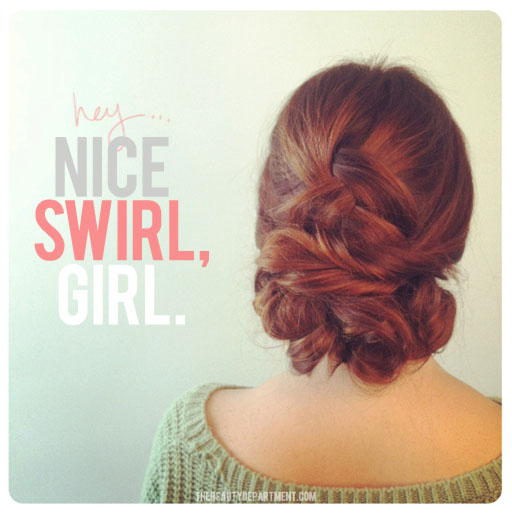 So I did a big cornrow down my hair, rolled it under itself and held it in place with a ponytail holder and then accented it with two flat twists. 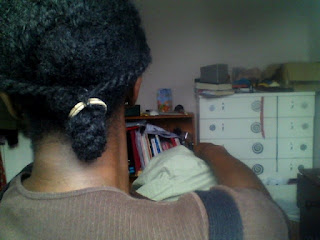 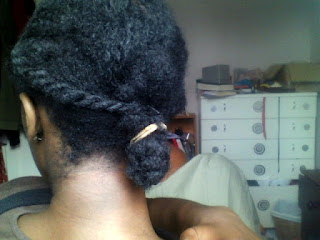 I'm okay with how it turned out - I just didn't like it on me. I'm someone who like hiding behind her hair and being without my fringe in front, and with my face so exposed, left me feeling more than  a little naked, so I took it down. I didn't use any more products; my hair was still slightly damp from the evening before and I'd learnt my lesson from last week!
I simply put it in a ponytail again, with three chunky twists pinned down with one huge hair pin [you can see it sticking out a little bit at the top]. 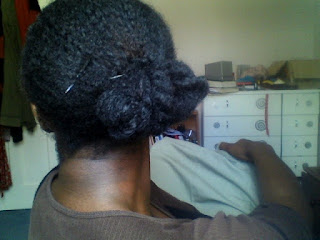 Oh, and of course my fringe was released again in front.

On Wednesday morning, I simply took my down out of the three twists and luxuriously finger de-tangled, applying coconut oil as I went as a pre-shampoo treatment for the next day. Then back up into the three extra chunky twists my hair went. 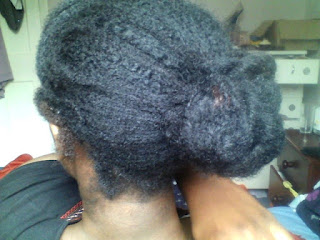 I've got to say, I LOVE the way the chunky twist style looks and just how versatile it is - I'm literally doing the same thing every single time but it looks so different depending on how you pin it. And it's so easy to do. And it makes my hair look amazing.

Am I allowed to have found the perfect hairstyle? BECAUSE I THINK THIS MAY BE IT!
Tweet