I held true to what I said and finally took out the twists, but I always feel like I need to reflect on it all...


I wrote about putting them in here, but in short:
It took 2 days to put them in.
Used some detangling spritz that I managed to rustle up and shea butter mix to put them in (so hair was damp and I don't think it was stretched).
I think I used the sister/rope twist method, where you twist the separate strands around themselves before wrapping them around each other and this helped in the longevity of the twists.

A bun. Seriously. That was it. Very similar to the first picture in this post. The thing I loved the most about this was that it was so low maintenance. I don't think I wore it down for longer than two days over the entire six weeks. 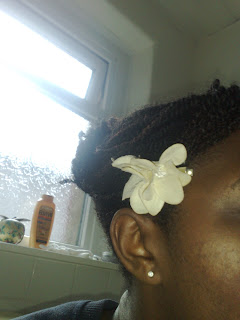 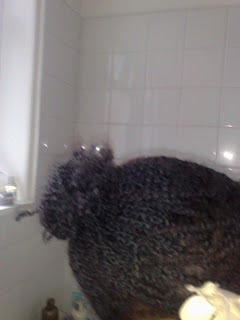 Some Fridays I declared casual and would thus wear my hair....in a ponytail. 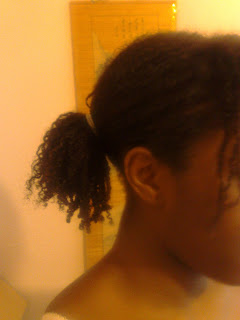 If, if some strange reason, I did want to wear it down (*gasp!) I used about 50 bobby pins, and became a liabilty around magnets, to cross wrap my hair at night, took them out in the morning and then went on my business.

(Almost) Every Friday night before I went to bed - or Saturday morning - I would massage my head all over with some Vatika oil and leave it on for at least 20 minutes. Then I diluted 1 tablespoon of apple cider vinegar with 1 tablespoon of water and sprayed that mixture all over my head piece and then went about my house cleaning business smelling like a chippy.
And then I hopped under the shower (before it broke, at which point I dunked under the tap) rinsed, rinsed and rinsed some more and then conditioned with Original Source Almond and Coconut Conditioner. I found it fore a reasonably cheap price (£1) from Home Bargains [it appears and disappears intermittently - it's really annoying] and it boasted some protein in it's ingredients. It works reasonably well, but I end up using a lot. I quite like the smell - it reminds me of marzipan, which I dislike (go figure). If my hair felt drier than normal, due to continual abuse, I just added a bit of olive oil and rosemary essential oil.

If my hair felt dry half way through the week, I either used a heavier moisturiser or got back in the shower with the Original Source Almond and Coconut conditioner to sort it out or just sprayed some rice water on it.
Going to bed, slept on my satin 'pillow case' and put my hair up with my scrunchie.

They stayed in for 6 weeks and a day before I started taking them down.

It took me a ridiculous amount of time to actually take them out - I started on Saturday morning and didn't finish until Monday.
My hat saved me at church, I swear.
I didn't use any product to help the take down process - I was far too lazy this time around and my focus was the ends. I checked the end of each twist before dismantling for knots or split ends. If I saw any split, snip! Off they went. I knew I had a lot of knots before I'd still been wetting my hair and letting it shrink up over the 6 weeks. Although I don't mind knots too much, I know that too many in one area would could cause lots and lots of tangling. When I finished taking the twist down, I ran my fingers over the area. Of I saw a split end, I trimmed. If it felt knotted, I trimmed, sometimes up to 2 inches in places where I felt it needed it.If I ran my finger over a few strands and felt the bumpy presence of knots, I cut them out because I knew that if I didn't do it then, they'd just tangle later. In short, I'm back under APL once again.
There were times over the two days when I got fed up, ripped through my hair from the roots instead of the ends and immediately regretted it. 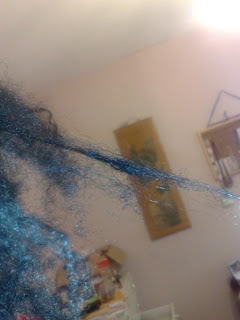 Yes, that is a knot. Sometimes the knots of shed hair were bigger than the hair still left and attached to my head. I just shed a lot.

To be honest, I really enjoyed having them in and if it didn't mean going through another 2 days of putting them in and then 2 days to take them out, I'd definitely consider doing them again. My hair really enjoyed it - I was surprised at how soft it felt when I took them down. I'd done my best to keep them moisturised and the ends away from the multitude of scarves I had insisted on bundling myself up in.

But I'm definitely taking a bit of a break from protective styling for a while...
Tweet